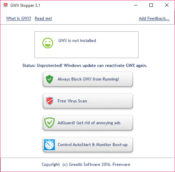 GWX Stopper helps you terminate the GWX process and remove it from executing at startup. You can rely on this tool because it works and it offers you a user-friendly interface.

If you have an older computer, it is a good idea to protect it against high resource-consuming programs to keep it running for a more extended period. You see that in time, specific Windows updates are going to slow down your PC.

You won`t have to worry that you have problems because this GWX Stopper helps you a lot. This one has a simple to use interface which has only a single function and thanks to its simplicity a lot of users can use it because it won`t integrate complicated functions.

As you launch the program, it automatically detects if a GWX is currently installed and running on the computer. It disables the GWX and prevents it from running in an efficient manner. After you block the process from running, you don`t need to use this app any further.

GWX Stopper only displays a red, large button which states “Stop GWX”. Clicking on this button, all of the unwanted processes are removed from your computer, and this means that this program can only be used once. It won`t remove any actual file from your computer.

If you want to turn the function back on, you need to rename the directory that this app has changed from “GWX-“ to “GWX”. GWX Stopper is a handy utility that helps you to remove the GWX process from your computer without actually deleting anything from your PC.

Unlocker
Unlocker is a small and