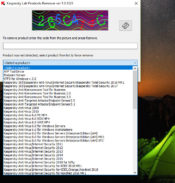 When it comes to removing applications developed by Kaspersky Lab, you may have some issues because there are few programs which can`t be removed that easily. It is the case of Kaspersky, a well-known antivirus which is quite difficult to uninstall. That is why you need to right tools to do the job.

You can uninstall any versions of Kaspersky from your Windows computer, so your anti-virus is removed from your device in no time.

Unlocker
Unlocker is a small and