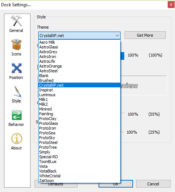 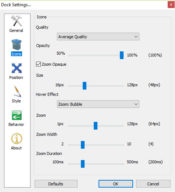 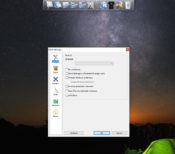 Whatever you might think about Apple and MAC OS, it’s undoubtedly one of the world’s best graphically developed systems. Some people would even describe it as eye candy, and many pick MAC OS simply because it looks better.

If you’re one of those people, then there’s good news: you’ll be able to change your Windows system to resemble that of MAC OS.

You can do that with RocketDock. It acts as a dock for your Windows system that will make it appear as though it is MAC OS.

It’s a very popular choice for many Windows users who prefer the MAC OS look. It also has several customizations that you can use to tailor your Windows experience to your preferences completely.

You can configure the dock completely with the settings inside the application.

The docks you can create with this utility are fully customizable. It will look like a genuine MAC OS dock, especially if you customize it even further.

You can use the zooming effects that make the dock larger or smaller. You can use other features like the Bubble, Plateau, or Flat tools or change the dock’s icons.

What is more, you’ll also be able to choose from a variety of themes to spice things up and to help you save time when you make the configurations.

There will be many choices here that are aimed primarily at making things simpler for you.

To conclude, RocketDock is an excellent option for Windows users that want to make their Windows appear more like MAC OS, especially if you’re going to change the dock.

oCam
OCam is a free and

Mouse Jiggler
Prevent screensaver activation while you are away
wpDiscuz