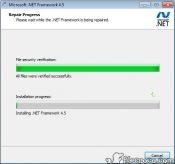 Those who tend to program and develop Windows software need to use .NET Framework, a framework that developers use to create and build apps and services. It acts as the infrastructure for developing the software.

It means that it will provide developers with everything they’ll need to get started with developing their programs inside the framework.

It is a collection of all the tools, libraries, and essentials that a programmer would need to develop an application or service for Windows.

It will provide the programmer with everything needed, including a platform where they’ll write the code. It’s most suitable for individuals, but it’s also commonly used by larger programming companies.

With it, you’ll be able to create programs and applications seamlessly. Whether you want to write from scratch or work from templates, it will give you all you need.

It has all three of the most commonly used components: CLR, FCL, and ASP.Net. These all offer different programming capabilities and features.

Use CLR, FCL, and ASP

All of these three serve a particular purpose for programmers. For instance, CLR acts as a runtime environment. It means it will help you launch and execute .NET apps you’ve just created, allowing you to also use a language compiler, with support for security and cross-language integration. There’s also the debugging feature and profiles.

FCL, on the other hand, will have several classes, services, and interfaces that you’ll need to use to create programs. It also supports database interaction and XML usage.

ASP.NET is a highly popular open-source framework that programmers will use to create dynamic web pages, apps, and services. You may also use HTML, CSS, and Java languages to do that.

.NET Framework is an environment for developers who want to create software and services for the Windows.